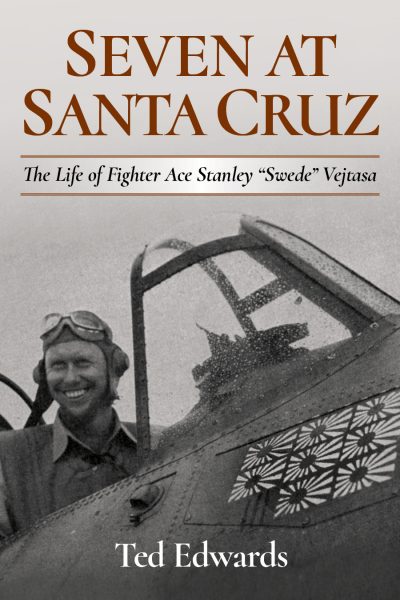 WWII pilot, Stanley “Swede” Vejtasa, became a naval hero fighting the Japanese in the Pacific. Author, Ted Edwards, joins Mark to discuss his biography of Swede, Seven at Santa Cruz. The fighter pilot ace dive-bombed and helped sink the first aircraft carrier lost by Japan. The next day, he took off from USS Yorktown and out-flew and out-gunned three Japanese Zeros. We get a close up look at the battles of Santa Cruz and Coral Sea and learn how “Swede” Vejtasa became the only dive bomber pilot to be awarded Navy Crosses for both bombing and aerial combat.

Author Ted Edwards is a frequent contributor to the Naval Aviation News and uses his experience as a historian and author on other World War II aviators to capture the straight-forward fighter pilot that was at the core of Stanley “Swede” Vejtasa’s personality. In all, Edwards collects information from not only secondary resources, but also from primary sources such as letters, after-action reports, official records in the national archives research, and 11 interviews conducted by the author, to include an interview with Vejtasa himself. The combination of historical records and personal interviews throughout the book, combined with the ease of reading the material, help to present both a factual and personal account of Vejtasa and naval air operations in the Pacific theater.

This work is the first biography on Vejtasa and clearly fills a void in previous literature. Anyone interested in learning about the pragmatic and sometimes abrasive fight pilot ace Stanley “Swede” Vejtasa, or about World War II naval aviation, would be well rewarded for the time spent reading this thoroughly researched and well written book.