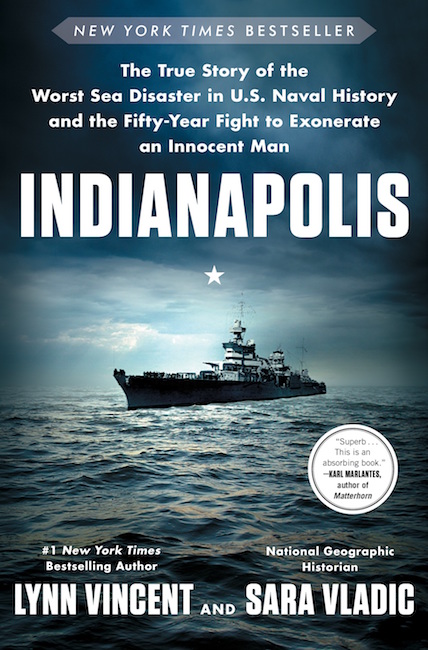 Mark speaks with best-selling author, Lynn Vincent, and National Geographic Historian, Sara Vladic, about their new book, Indianapolis: The True Story of the Worst Sea Disaster in U.S. Naval History and the Fifty-Year Fight to Exonerate an Innocent Man.

Just after midnight on July 30, 1945, days after delivering the components of the atomic bomb from California to the Pacific Islands in the most highly classified naval mission of the war, USS Indianapolis was sailing alone in the center of the Philippine Sea when she was struck by two Japanese torpedoes. The ship instantly transformed into a fiery cauldron and sunk within minutes. Some 300 men went down with the ship. Nearly 900 made it into the water alive. For the next five nights and four days, almost three hundred miles from the nearest land, the men battled injuries, sharks, dehydration, insanity, and eventually each other. Only 316 survived.

For the better part of a century, the story of USS Indianapolis has been understood as a sinking tale. The reality, however, is far more complicated—and compelling. Now, for the first time, thanks to a decade of original research and interviews with 107 survivors and eyewit­nesses, Lynn Vincent and Sara Vladic tell the complete story of the ship, her crew, and their final mission to save one of their own.

Published by Simon & Schuster, Indianapolis relates individual stories of the sailors, their ordeal in shark-infested Pacific waters awaiting rescue, the aftermath and media coverage, as well as the families of the lost and efforts to exonerate the captain after his court martial.

Listen to veterans of the USS Indianapolis talk about their experiences in this trailer for Indianapolis.

Pick up your copy of Indianapolis from Simon & Schuster>>