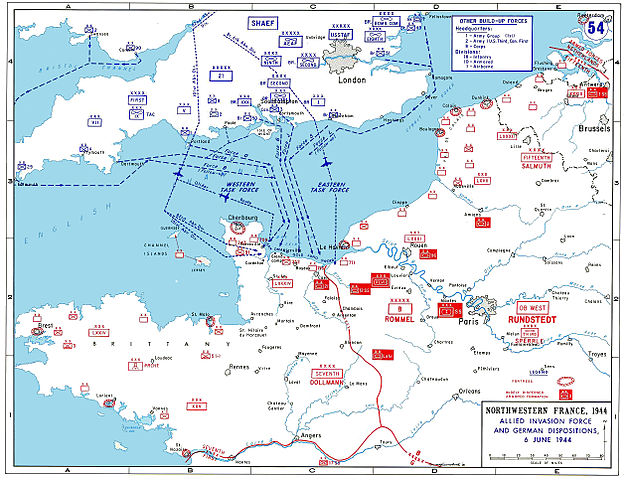 Mark discusses the intricate deception plans that the Allies employed to confuse Nazi Germany about the location of the D-Day invasion. Will it be Pas de Calais as Hitler declares so convincingly? Or even Norway? Eisenhower is sure of one thing: it must succeed. There is no Plan B.

This week’s podcast is a continuation of a series of podcasts dedicated to the 75th Anniversary of D-Day. Last week in Operation Overlord: Planning the D-Day Invasion, Mark covered the lectures Stephen Ambrose gave at the University of New Orleans that dealt with the planning and preparation the Allies made for Operation Overlord and the selection of General Dwight D. Eisenhower as Supreme Allied Commander.

In this episode, Mark dives into Operation Fortitude, the grand plan to fool Hitler into thinking the invasion would come somewhere other than Normandy. Eisenhower had to resolve four major issues for the D-Day invasion: where, when and how to launch and the need for a deception plan to ensure that the Germans would be surprised.

Eisenhower and his staff were to resolve four major issues for the D-Day invasion: where, when and how to launch and the need for a deception plan to ensure that the Germans would be surprised. This necessity hatched the plan for “Operation Fortitude.” It was a grand plan to fool Hitler into thinking the invasion would come somewhere other than Normandy. Fortitude North led the Nazis to believe the Allies were preparing to invade Norway. Its counterpart, Fortitude South, directed their attention to the Pas-de-Calais in France near Dunkerque and the Belgian border.

In the northern operation, a team of two dozen British officers went to the the upper reaches of Scotland and began filling the airwaves with fictitious radio messages. These fake transmissions duplicated the traffic that would simulate the build-up of an actual army preparing for a Nordic invasion. Requests for crampons used for ice climbing, ski bindings, instruction manuals for engine maintenance in extremely cold weather, wooden warplanes on Scottish airfields and fake tanks that accompanied dummy divisions pointed to Norway as the Allied target. It was enough for Hitler to keep 13 Wehrmacht divisions and 150,000 Luftwaffe and Navy personnel in that country—not defending the Atlantic Wall in Normandy.

Fortitude South was just as confounding. In addition to phony radio traffic, dummy landing craft floated in southern England ports while inflatable and papier-maché tanks dotted the fields. Movie industry stagehands built a bogus fuel depot at Dover and spies reported heavy troop activity there. All this suggested the invasion target was Calais. Perhaps the piece-de-resistance of the southern operation was the use of Lt. General George S. Patton as a decoy. The Germans thought of him as the Allies’ best general and were certain he would lead the invasion. He commanded the First U.S. Army Group composed of actual and fictitious units: the Third Army was still stateside, the British Fourth Army was fictitious and 50 more imaginary divisions were about to leave America to land at the Pas-de-Calais to support the invasion.

While some of these divisions did exist, the deception plan caused the Germans to believe that 89 Allied divisions were at the ready with enough landing craft to send 20 in the first wave of the attack. In reality they might be able to send six divisions. Eisenhower was gravely concerned about the shortage of landing craft and equally adamant about keeping the coastal areas of England secure. The success of the invasion was paramount; there was no Plan B.