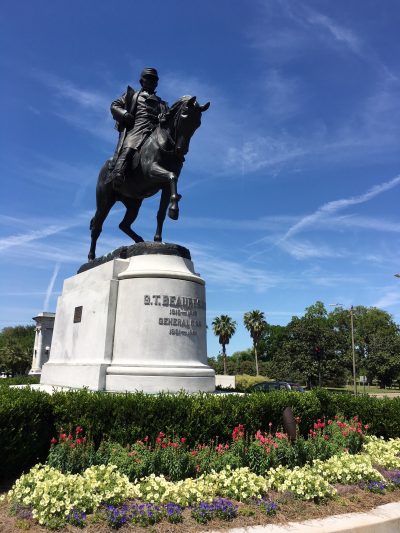 This week, Mark takes a cursory but analytical look at a few key July historical events. He discusses WWII, including the Einsatzgruppen SS mission in the Soviet Union, as well as the Civil War battle of First Manassas (Bull Run). He also takes a look on the lighter side—how Louisiana took an innovation from the 1930’s and raised it to a higher level.

P.G.T. Beauregard, a Louisianan whose first language was French, graduated second in his West Point class of 1838 and served with distinction in the Mexican War. He briefly was commandant at West Point when the war began, but left the post for his home state. Beauregard was in charge at Fort Sumter when the first shots were fired. As said above, he commanded the forces at First Manassas where the smoke and haze of the battlefield made it difficult to distinguish the Confederate National Flag from the Stars and Stripes. Afterwards, when home in New Orleans, he designed the battle flag, using the St. Andrew’s Cross on a field of red with thirteen stars. This became what is generally thought of as the “Confederate Flag,” and first flew over troops at Shiloh in April 1862. Here Beauregard served and took the reins as senior field officer after Albert Sidney Johnston died shortly after a mortal wound. After the war, Beauregard returned home and worked for civil rights and reconciliation. After the war he wrote, “With regard to the suffrage of the freedmen, no matter how objectionable it may be at present, it is an element of strength for the future.”

17 July – USSR. SS Gruppenfuhrer Reinhard Heydrich gave the orders for four SS Einsatzgruppen to follow the Wehrmacht into the Soviet Union with the invasion. Their purpose was not tactical nor military, but part of Nazi party ideology. They were to exterminate Jewish and Roma/Sinti or Gypsy communities as well as any political opposition. This especially meant any communist party members.

One of the effective players in this operation was Erich von dem Bach-Zelewski. He would fly from town to town and have his aides gather up records from city halls.  There they would find a listing of officials as well as classification by ethnicity of local citizens. The good record keeping made the job much easier for the SS.

31 July – Moscow. As the German armies pushed toward Stalingrad and into the Caucasus, Stalin gave the orders that no Red Army units were to retreat. “Not one step backwards,” the orders read. “Commanders, commissars and political workers who abandon a position without an order from higher headquarters are traitors to the Motherland and will be treated accordingly.” The communist party news organ, Red Star, emphasized that any soldier who fails and does not do his duty “on the battlefield instead of standing to the death will be condemned as a traitor selling his country into Germany slavery.”

“Accordingly” apparently translates a “shot” in the original Russian. This brings to mind the quote from Joseph Stalin, “It takes a brave man to be a coward in the Red Army.”

17 July – Solomons Islands. In the Pacific, the Allies staged a heavy 12-hour air raid on Japanese naval and air positions. Wave after wave of Liberators and Flying Fortresses bomved the Kahili airfield and paralyzed or destroyed the enemy planes on the ground.  Torpedo bombers, the Avengers, attacked ships at Bougainville while their support fighters tangled with the Japanese Zeros. The Allies sunk seven ships in the harbor, including a light cruiser and two destroyers. After shooting down nearly fifty Japanese aircraft, all but six Allied planes returned safely home.

20 July – Wilczy Szaniec or Hitler’s Wolf’s Lair in NE Poland, what was East Prussian, was the scene of the famous von Stauffenberg plot to kill the Fuhrer. At 12:42 pm in the Conference center of the compound, Hitler was poring over maps with his General staff when a huge explosion blew the room apart.  Colonel Claus von Stauffenberg had been in the meeting and left his explosive-laden briefcase strategically placed under the conference table.  By all logic, this should have done the trick.

Von Stauffenberg had excused himself from the meeting and had plans to proceed to Berlin to carry out the plot.  In the meantime, one of the officers moved the valise, having accidently hit it with his foot. Although four officers died from the explosion, Hitler was relatively unscathed considering the impact. He was left with temporary deafness and physically shaken, but was able to receive his ally, Benito Mussolini, later that day.  The famous photo shows the two inspecting the aftermath of the blast together.