George Luz, Jr. Remembers His Dad and the Men of Easy Company 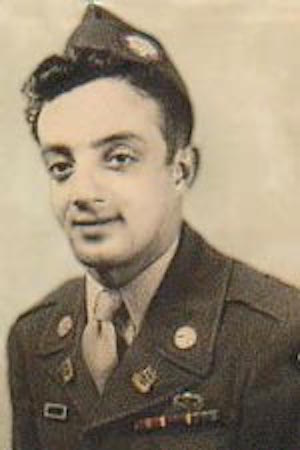 Guest George Luz, Jr. shares stories about his father, George Luz, who was a paratrooper with E Company, 506th Parachute Infantry Regiment, 101st Airborne Division. They discuss the experiences of the men of Easy Company who fought with him during WWII, and the training, toil, camaraderie and sacrifices of this storied unit that was immortalized by Stephen E. Ambrose in his best-selling book, Band of Brothers.

“One of the pillars of Easy Company,” was how Major Richard Winters described him. George Luz was born into a large Portuguese-American family in Fall River Massachusetts on June 17, 1921. Moving with his family to Rhode Island in search of work, Luz quit school in his junior year to help his parents and eight siblings make ends meet during the Great Depression. Incensed as many Americans were by the Japanese Attack on Pearl Harbor on December 7, 1941, Luz enlisted in the Army and, attracted by its elite status and the extra 50 dollars a month jump pay, volunteered for the newly formed airborne forces. Ordered to Camp Toccoa, Georgia, Luz arrived at the newly created home of the 506th Parachute Infantry Regiment to begin what he would later call, “the best three years of my life.”

George Luz, Jr.’s journey began when he was 9 years old in 1965 at the 101st Airborne Division Reunion at Ft. Campbell, Kentucky. For over 53 years, he has been blessed to spend time with these men, their wives and their children. As we say good bye to each and every one of them, he feels it is his honor and privilege to share their stories.