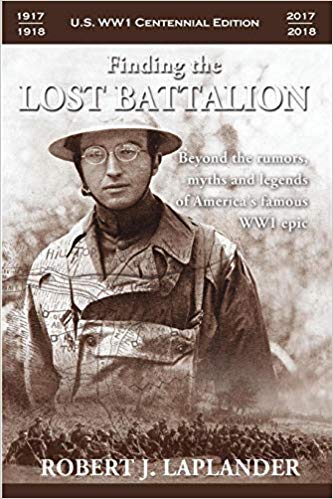 Mark’s guest is Robert J. Laplander who wrote the book, “Finding the Lost Battalion: Beyond the Rumors, Myths and Legends of America’s Famous WWI Epic.” They discuss the deep research Laplander did in order to tell the story of the soldiers and their commander, Charles Whittlesey and their grueling ordeal by fire in the Argonne Forest. This definitive work follows these men of the 77th Division and chronicles their lives and sacrifices in battle during September and October 1918.

About Finding the Lost Battalion

Robert J. Laplander has become the benchmark work against which all things Lost Battalion related have been measured. Now, in this updated 3rd edition released to coincide with the centennial of America’s entry into WW1, Mr. Laplander again takes us to the Charlevaux Ravine to delve deeper into the story than ever before! Meticulously chronicling what would become arguably the most famous event of America’s part in the war, we find the truths behind the legend. Spanning twenty years of research and hundreds of sources (most never before seen), the reader is led through the Argonne Forest during September and October, 1918 virtually hour by hour. The result is the single most factual accounting of the Lost Battalion story and their leader, Charles W. Whittlesey, to date. Told in an entertaining, fast moving style, the book has become a favorite the world over! With new Forward by Major-General William Terpeluk, US Army (Ret).

Author and historian Robert John Laplander was born February 23rd, 1966 in Tucson, Arizona and grew up in Northern and Southeastern Wisconsin. The study of American participation in the First World War, and in particular the activities of the 1st Corps of the American 1st Army during the Meuse-Argonne Offensive, has been a lifelong passion. His specific research into the
‘Lost Battalion’ of the 77th Division spans 20 years and is by far the most extensive ever done in their regard. His book on the subject, Finding the Lost Battalion: Beyond the Rumors, Myths and Legend of America’s Famous WW1 Epic, has become the benchmark work on that event, for which he is recognized the world over. This work led to his being a featured figure in the television event ‘The Great War’; a 6-hour, 3-part record of America’s contributions in WW1 presented as part of the American Experience series for PBS in conjunction with the 100th Anniversary of the war in April, 2017. He has also provided professional development lectures for the US Army to both the old 77th Regional Readiness Command and the 78th (Training) Division and still lectures to groups of all kinds on both the Lost Battalion and the American experience in WW1 in general. Mr. Laplander is also a partner in the US WW1 Centennial Commission, managing both Doughboy MIA, a site which tracks all missing US service personnel from the war, and The Lost Battalion portions of the Commission’s massive web presence. He is also currently engaged in several other written works, among which is a biography of the commander of the Lost Battalion, Charles Whittlesey.