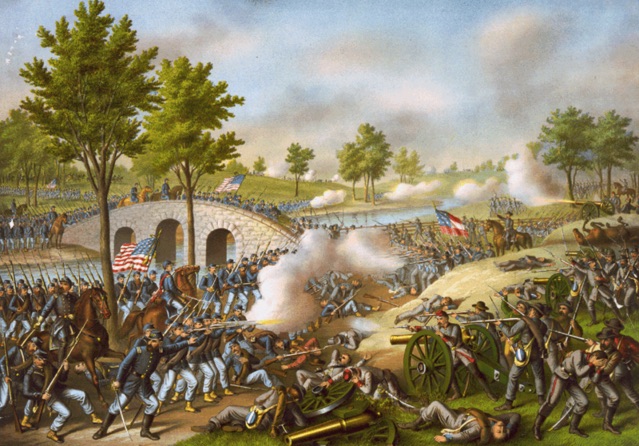 Professor Gerry Prokopowicz, author of Did Lincoln Own Slaves? Frequently Asked Questions and Answers about Abraham Lincoln and All for the Regiment: The Army of the Ohio, 1861-1862, joins Mark to discuss the events leading up to the Battle of Antietam in September 1862. We cover the Second Battle of Manassas (Bull Run) that August, Robert E. Lee’s reasons for taking the Army of Northern Virginia into Maryland and the beginning of the battle.

The Battle of Antietam took place near Sharpsburg, MD on 17 September 1862. It is often referred to as the bloodiest day of the war. The battle was the culmination of the Maryland Campaign which actually had its roots in earlier in actions that occurred in Virginia in the late spring and early summer of 1862.

The Antietam Battle itself pitted rising star Robert E. Lee, the Virginian who had recently taken the reins of the Confederate army in the east, against the young, ambitious Union General George B. McClellan. Lee had faced McClellan a few months earlier in southeastern Virginia and had thwarted McClellan at the end of the Peninsula Campaign, his grand plan to capture the Confederate capital of Richmond.

During the spring and early summer, General McClellan had moved his army up the Virginia Peninsula, pushing the Confederates back in a series of engagements that began near Fort Monroe at the Chesapeake Bay and ended near the outskirts of Richmond. The Seven Days battles at the end of June were successive battles in which McClellan had done well—he even could be considered victorious in 4 out of 5 battles. However, Robert E. Lee had taken over the Confederate command after Joseph Eggleston Johnston was seriously wounded at Seven Pines in May. Lee was able to stop McClellan on the outskirts of Richmond and the campaign, in which McClellan had started with great hopes and a massive army ended in failure. Afterwards, President Lincoln replaced McClellan in northern Virginia, with John Pope, who had been fairly successful in the west, capturing Island No. 10 in the Mississippi River. Lee subsequently defeated Pope soundly at Second Manassas, or Bull Run.

Stonewall Jackson waged a brilliant campaign in the Shenandoah Valley in the Spring of 1862. He had beaten and outmaneuvered three Union armies, successfully keeping them away from pressuring Richmond. In June, he led his men on a forced march to join Lee near Richmond for the Seven Days battles.

Gerald J. Prokopowicz is the author of Did Lincoln Own Slaves? Frequently Asked Questions and Answers about Abraham Lincoln and All for the Regiment: The Army of the Ohio, 1861-1862 as well as the online host of Civil War Talk Radio. He served for nine years as the resident Lincoln Scholar at the Lincoln Museum, in Fort Wayne, Indiana, where he helped create the award-winning exhibit, “Abraham Lincoln and the American Experiment,” and edited Lincoln Lore. Dr. Prokopowicz is a member of the Advisory Boards of the Lincoln Studies Center and the Lincoln Forum, and holds a law degree from the University of Michigan and a Ph.D. in history from Harvard University. He is currently a professor and chair of the history department at East Carolina University in Greenville, North Carolina.